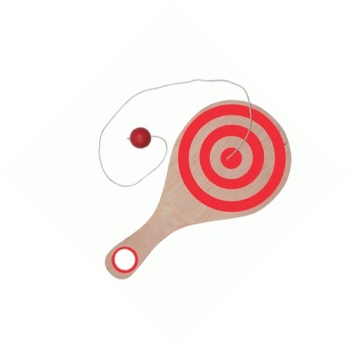 With a delicious Irish meat pie sitting on the table, my 4-year-old son looked across the same table and saw a chubby red rubber ball, 13 months his junior. Carefully, with a small elastic string, he tethered his brother to a hard, mischievous paddle.

As the “playful” paddling continued, each smack was met with a shrill, vile cry of defiance. Meanwhile, my half-full plate of food steamed in front of me, while a half-empty temper steamed inside of me. The noises were a bloody distraction from my meat and potatoes — like watching a battle unfold on the evening news during supper. Only this was worse — because I had to get involved.

And no one wants to get involved when he has a napkin on his lap.

But a father is bound to his children. So, yes, I put my fork down and got involved.

Usually, loyalty sounds so patriotic and glorious. When I walk into someone’s office and see one of those framed inspirational photographs with the word Loyalty printed across it, I can almost hear the majestic cadence of fireworks exploding in my heart.

I know we like loyalty, but do we value loyalty? We like to make vows, and we like to watch others make vows. But it seems we also like to delete them once they become a burden to our freedom.

We want to eat our meals in peace.

A few months ago, William Carrol, a pastor at Times Square Church, reminded me of Jonathan’s loyalty. That man always gets rave reviews for his loyalty to David. We like stories like this one, and we insert them into our greeting cards and circumstances as needed.

No inspirational conclusion to that story. Jonathan died in battle.

The story complicates the rosy mood-lighting and flag-waving that I usually associate with God’s concept of loyalty.

One natural reaction to this story is to criticize him for not moving on, for not ending an unhealthy relationship with a bad family member, and for not breaking old vows which surely must not apply anymore, even in God’s eyes — because God doesn’t want us to suffer. Right?

Why would God want someone to remain loyal in a situation like that? How could God ask for obedience in the face of suffering, a suffering which leads to an undeserved and unfair death?

Wait. Maybe we ought to ask ourselves that question one more time.

And then we ought to throw ourselves down on our knees, in thanksgiving, because Jesus didn’t get weak in His knees and choose a “victorious life” of freedom — from unjust entanglements.

I’ll admit that sometimes I sense a new gospel long to rise up in my spirit. But it’s a gospel that begins and ends in the flesh. It’s a gospel that defines good news as the removal of present suffering. If I’m not mistaken, it’s the gospel of the Antichrist.

Most of our suffering operates within the context of our vows — to Work, Family, or Faith. Vows bind us to something or someone beyond ourselves and beyond our control.

And that gets messy and painful. In fact, sometimes vows will kill you.

Yet Jonathan remained bound to a man who had chosen evil. He did it out of duty to his father’s title and position — rather than to his character.

Remaining loyal to a position, in spite of the character and personality which occupies that position, is not a popular or palatable idea these days.

How could anyone do that? Well, Jonathan did it because he was bound by God’s Word. Quite simply, It is written, without qualifiers or conditions, “Honor your father.”

But how awfully and painfully difficult the execution.

David’s heart wept when he heard the news, crying, “How have the mighty fallen in the midst of the battle! Jonathan is slain on your high places” (2 Samuel 1:25).

Jonathan did not deserve to die. Remaining loyal to a vow put him in an undesirable place. But David knew something of God’s heart. He knew that God had a high place for those who remain loyal. Even unto death.

We may think loyalty ends if and when it puts us in too low a place. But God calls loyalty — even unto death — a higher place.

So the next time I feel life smack me in the direction of an undesirable entanglement, I ought to put more than my fork down.

Because if I go down on both knees, obediently, there will be a strength to raise me up — to an even higher place.

8 thoughts on “The Smack of Loyalty”